It has probably become apparent to you readers and drinkers that I love Barbados. It is an island with such a fascinating history and as it happens, they are home to the oldest rum in the world: Mount Gay Rum. This would be a coincidence that I knew I loved Barbados before finding out this fact. Having missed Crop Over this year, I wanted to at least go for Independence with November 30, 2016 marking exactly 50 years of independence.

Throughout my trip, I  definitely spent the majority of the time in someone’s rum shop starting with a mini of Mount Gay Mauby Rum not even 15 minutes after leaving the airport. After just a few minutes of waiting for my luggage, I was on my way to meeting my friend Trevor – a longtime bestie that gave me two options: 1. head straight to a rum shop or 2. meet with a friend to grab a key and then go to a rum shop. Obviously, I chose 1. 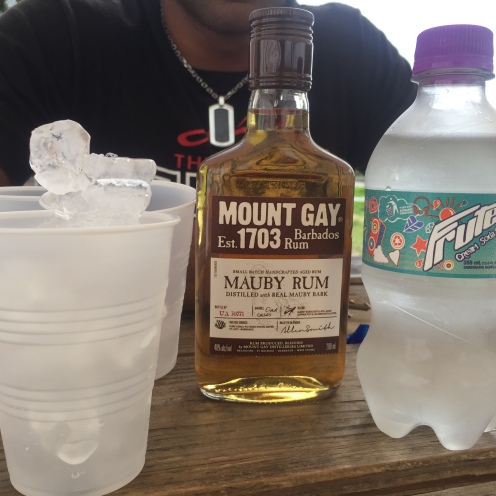 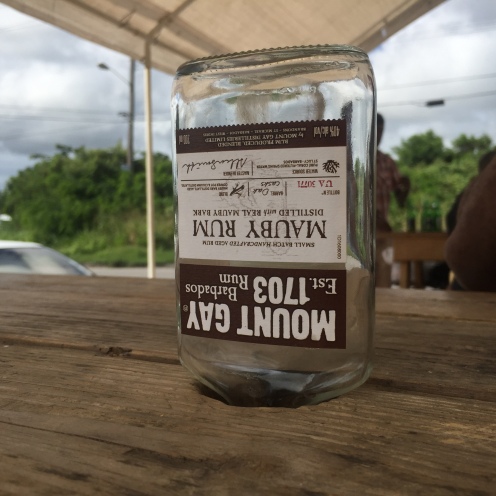 Prior to my trip I knew I would be visiting the Mount Gay Rum Distillery in St. Lucy, something not generally offered to the public except on invite for good reasons: it’s not easily accessible to the average visitor, we shouldn’t interrupt employees hard at work with scores of visitors all day, it isn’t the most interesting looking place on the inside unless history and rum are your thing, and there is a fantastic Mount Gay Visitor’s Centre that gives you a lot of information and drinking opportunities that are usually the desired options anyways. While I would eventually spend a good amount of time in the rum shops drinking rum, the distillery trip was something I was looking forward to because as my friend asked and answered in one remark as we approached the distillery, getting to do this tour was probably a rum mecca for me. It was a place I have never been but somewhere I knew would hold a lot of meaning to my appreciation not only for rum, but the island itself.

On November 29th, we were greeted by our guide for the day, Darrio Prescod, who is the brand ambassador for Mount Gay Rum and a great resource to other brand ambassadors outside of the Caribbean region. Darrio led the tour first introducing us to the history of Mount Gay. The distillery is located in the same place it has been for over 300 years and looking around the buildings, the equipment, and the remnants of an old windmill, it was evident there is a lot of history to be learned beyond this tour. Next he went into the basic ingredients of rum and quickly reminded us about one of the key reasons Mount Gay Rum is so unique (and that I often forget about but shouldn’t), is the island’s naturally filtered coral water that makes for not only a safe source of water, but it also tastes good. I had a discussion over the weekend with a friend from New York and he commented on the reason why New York bagels taste so good is the Brooklyn tap water that they use. While I would take rum over bagels in a heartbeat, it would make sense that water plays an important role including in flavor. 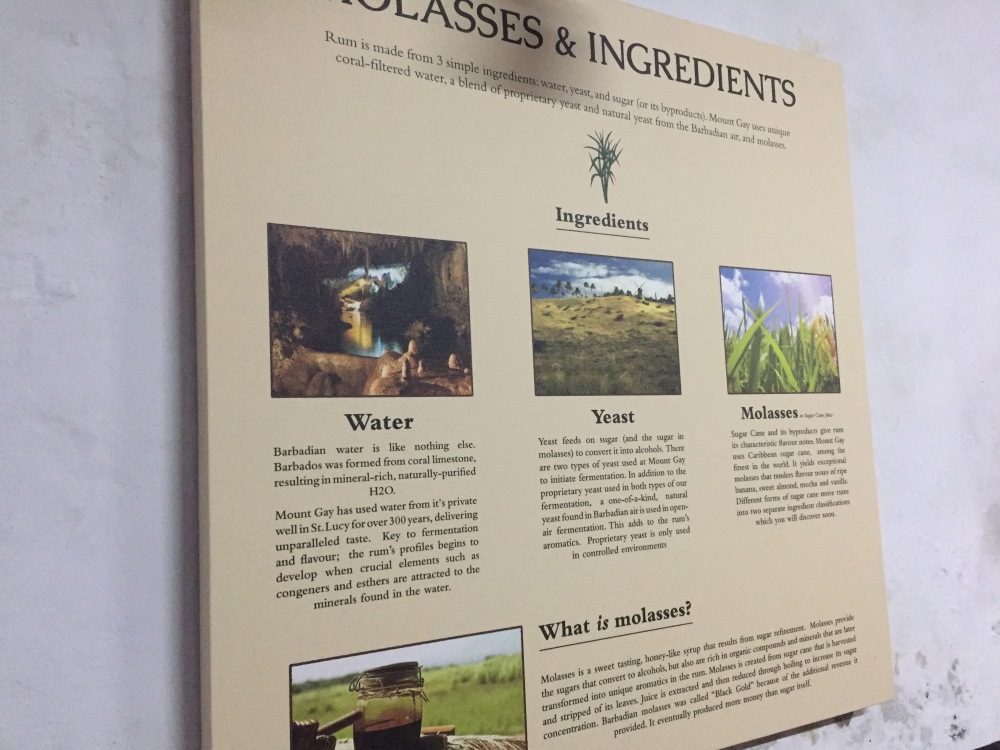 The distillation and maturation processes have a number of variables within that are responsible for our personal preferences in rum. Mount Gay Rum uses two types of fermentation with one being open air. This is interesting to me because every time I come to Barbados, there is an immediate familiarity with how nice the island smells. I can’t really describe in detail as it is probably most noticeable in the first 30 minutes but I would assume between the types of plants, trees, rainfall, and well, everything that makes up Barbados, it is why I always take notice. I wouldn’t get this same feeling throughout the United States except perhaps when visiting a busy city where certain bakeries or smog influence my sense of smell. I’m not sure if what I get in the air has anything to do with this fermentation process but if I can smell Barbados (and this is a good thing mind you), I would like to think the indescribable experience I get is that uniquely only-Bajan part that cannot be done in any other place with the same result. There is also a controlled fermentation process as well to manage the consistency of the resulting wash lest you wonder what happens when the weather changes.

Distillation is done in copper column and pot stills  that come from Scotland and Spain. There are distinct characterizations for the two stills and both are key to the resulting rum Mount Gay produces. Having done the blending session where you taste both options, there are very clear differences in the resulting rums. The double copper pot still process (one that requires two runs through the pot) often mentioned in the company’s literature which lends itself to Mount Gay’s proclamation for “the distinct bold character,” is also in the hands of the master distiller who simply knows when the product is right just as Master Blender Allen Smith would know when the finished product is ready. Their expertise in these stages are instrumental in the consistency of what we know Mount Gay Rum to be today. 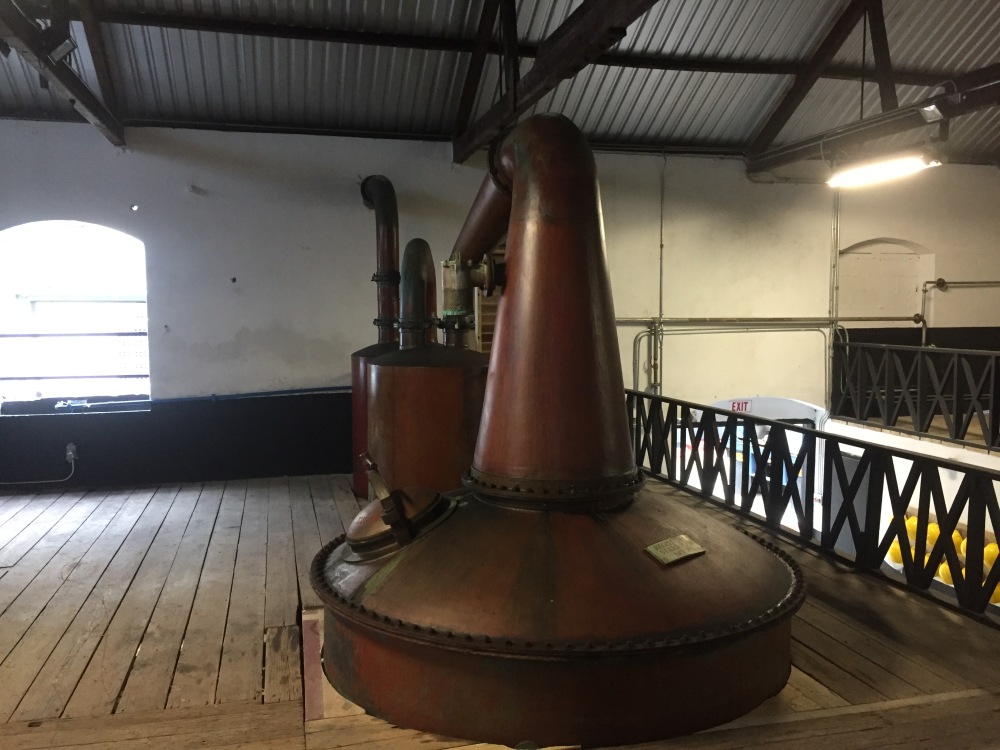 A side note, there is the Origin Series 2 which focuses on the Column and Pot Still distillation processes which is available for purchase in select markets (something I still need to do). One of my questions early on in the tour was about various companies that are releasing special and limited edition rums including cask finishes and Mount Gay’s vision given their recent Cask Strength Edition. The decision to release the Origin Series is to educate the public on these intricacies that make Mount Gay so identifiable in its character. I would say if you either have no interest in seeing the process but want to know more about the results in flavor, the Origin Series is a good place to begin your personal rum tour that you can enjoy in the comfort of your home.

During my tour, Darrio taught us about the heads, hearts, and tails of the phases of distillation; those that we can thankfully rely on the master distiller for knowing. In a nutshell we shall never drink the heads which smells of acetone; something Darrio ensured we would absolutely not accidentally consume because well, acetone. The heart (the resulting potstill below) I will remember as I heart rum, or the good stuff. The tails, which would make sense, are leftovers of sorts (and not the ones we want). We also tasted the molasses at this point and were getting closer to the sampling part of the tour. 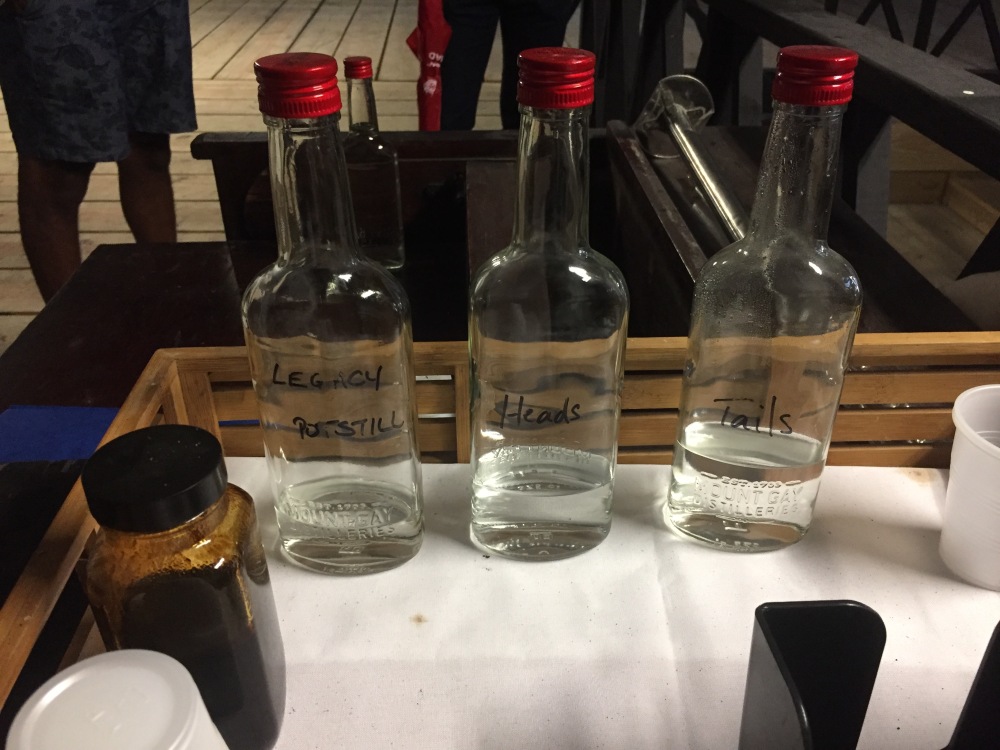 Darrio led us to the stills and gave us further information about how despite advancements in technology, those that are involved in distillation must know how the process works from its origins as even technology can fail. I would use an analogy from today’s vehicles. If your tire went low but the tire pressure monitor didn’t show what was happening, you would want someone to be able to fix both. In this case, however, you have equipment like the Stirling boiler and pot stills shown below that while have gone through refurbishment, have been around for generations. 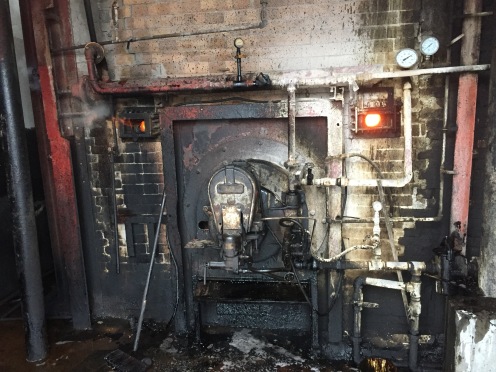 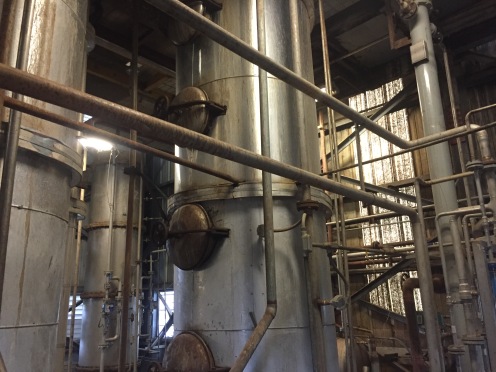 It’s funny, on our way to the distillery Trevor commented on how nice it was for it to be overcast and hoping it wouldn’t rain much because the temperature was perfect. Well, he jinxed our day it would seem because not only did it rain, but it rained a lot. That may be an understatement because a lot of the island became flooded and that would keep me from seeing the maturation process of the tour. Unlucky us had to do a blending session instead with apprentice master blender, Twanna Waterman which included so much sampling of rum, we ended up having to crack open a bottle of Mount Gay Black Barrel to keep us entertained. I would agree with Trevor that “there are better places to get stuck.” I hope you can sense my sarcasm as this was one of the best times ever. Not only getting to do a blending session of making my own Mount Gay blend, but also being able to talk about Barbados and rum with some of the most passionate people that work for the brand. 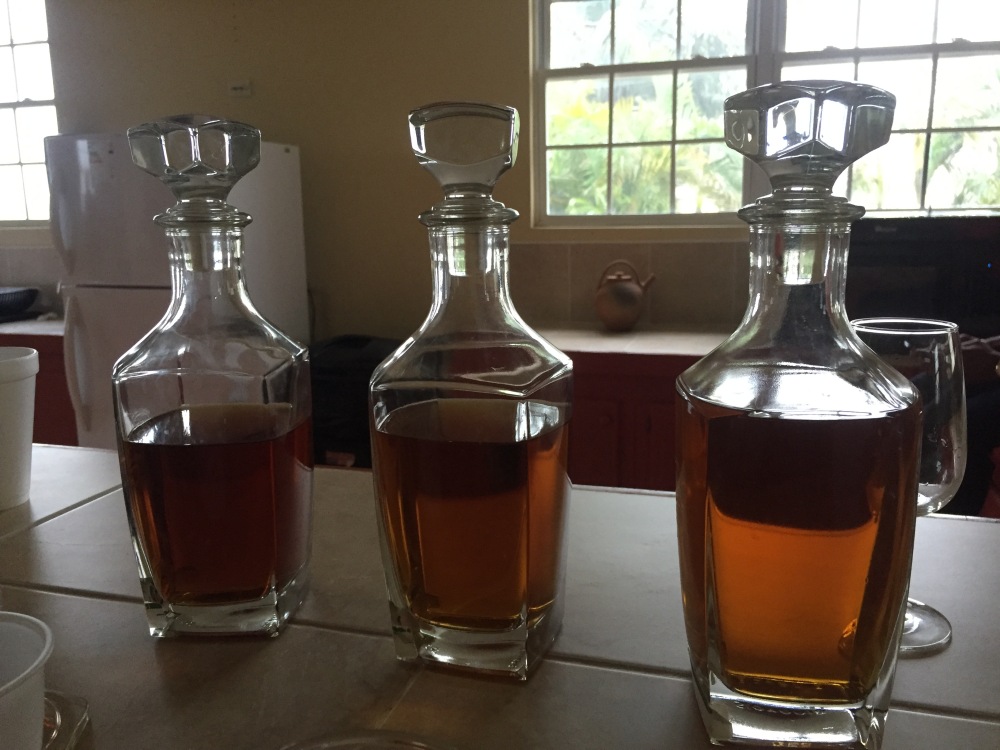 This was my second blending session having done one in Miami before. We were given a 7-year Copper Pot, 7-year Copper Column, and I believe a 2 year which I don’t recall if it was a blend or not. We were given all we needed to pour a little here and there to create our masterpiece of a blend. Whatever didn’t fit in our bottles we poured in our glasses to finish off. As the rain poured, Darrio and Twanna talked a bit about their experiences with Mount Gay and you can tell they really love what they do. In talking with Twanna about the challenges surrounding making rum and the island’s higher temperatures alone allows for up to 20% of their work to dissipate, or just in the mere details of how much hard work goes into creating a bottle of Mount Gay Rum, I hope some will see why rum, although inexpensive in comparison to some of Barbados’ most popular imported spirits, should be viewed as a highly sophisticated product. Since we were there waiting on the rain for a bit, Twanna was kind enough to make a blend for me using such precision, I have the utmost confidence when the current master blender retires, Mount Gay is in great hands. 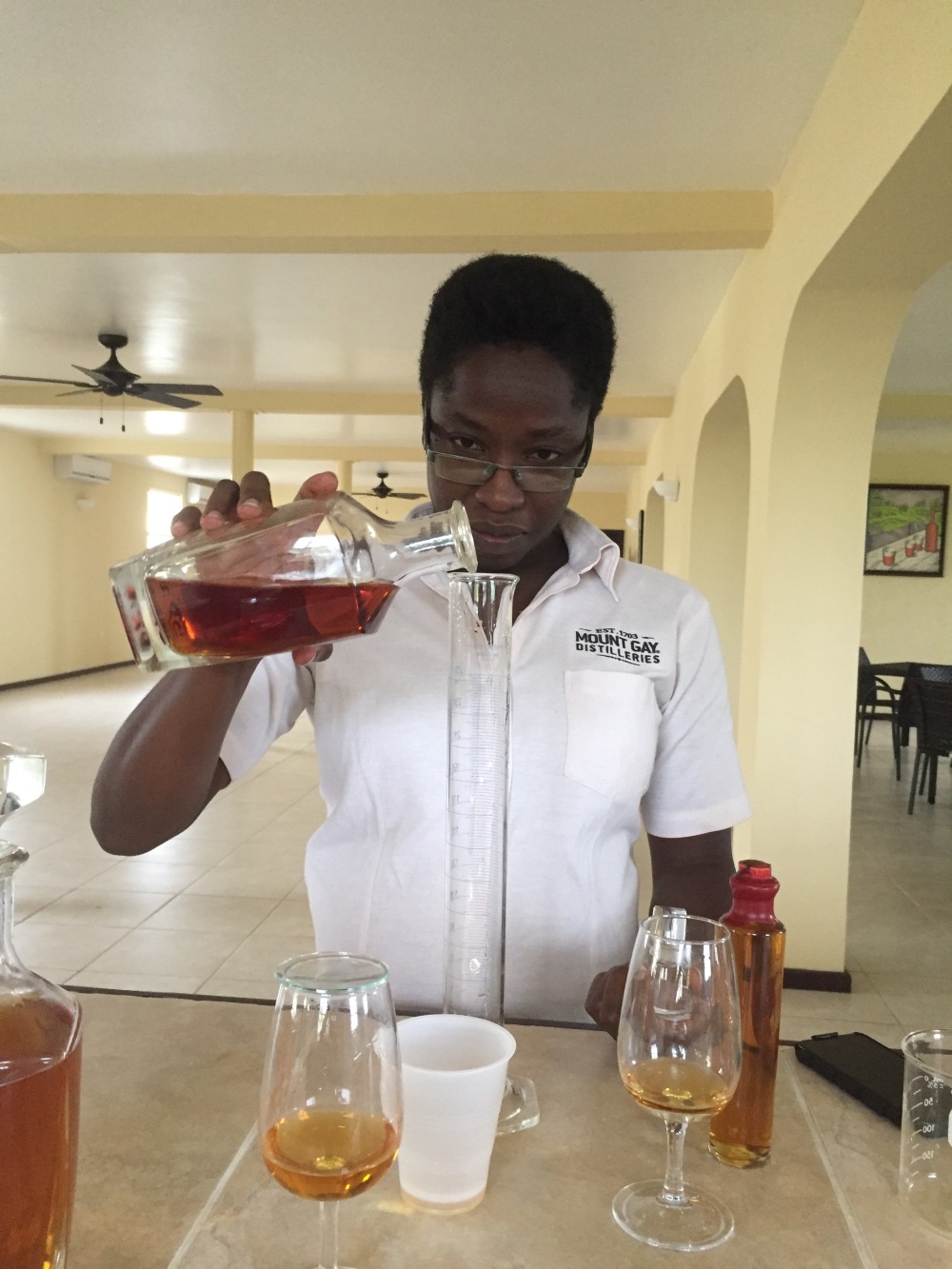 While I could have easily set up a bed next to the Mount Gay pantry for later use (hint, there is a lot of rum in there), I cannot wear out my welcome and will be sure to get the rest of my tour completed on a later date when the sun is shining. I would like to add that with generations of family members that work at the distillery in one area or another, one should not take the products for granted as it is more than just a process of machines. In today’s world of advanced technology, there are very human elements that should be acknowledged and given a nod of gratitude. This is another reason why rum is so special as it is not simply a recipe that can be followed with ease. It is something that must be learned, understood, experienced, and then masterfully carried out by passionate persons who want the quality to be no less than perfect.

Perhaps it was meant to be that I could ask a few more questions, or take in a bit of the scenery on an otherwise gloomy day because I was able to do so as Barbados celebrates their 50th Independence, on the property of the world’s oldest rum, on the island I have visited countless times, and with one of my most favorite friends on their birthday. It will remain one of those memorable experiences that reminds me (as if I needed any more reminders) why Barbados has so much to offer beyond its beautiful beaches as the history and culture are so rich and there is so much more to learn.